What does a Theme park Designer do? 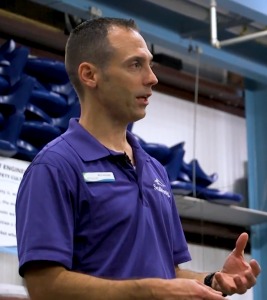 How do rollercoasters work? What goes into being a theme park ride designer? If they’re the kind of questions you find yourself asking, this First Careers film is for you! We flew over to America to visit the leading theme park company SeaWorld Parks & Entertainment in Florida, to find out more about what goes into building some of the world’s most famous attractions, which involved taking a terrifying walk up to the top of SeaWorld’s tallest rollercoaster. Eek!

Who would I be working for?

SeaWorld Parks & Entertainment, a leading theme park and entertainment company and one of the world’s foremost zoological organisations; renowned for the rescue and rehabilitation of marine and terrestrial animals.

What do they do?

Theme park design takes in a lot of different roles, and some people may do several or specialise in something really specific. But they do things like work on the layout of a park, come up with new ideas for rides, put those ideas into practice and build a ride, or work on the look and feel of a ride.

What sort of work is involved?

It depends on the particular park, and whether you work full-time for them or if you are a freelancer who does individual projects for lots of parks, but these are the kinds of things that the head of theme park development and engineering at SeaWorld might do:

What skills do I need?
This might differ from company to company, but skills that could be helpful include:

What qualifications do I need?
This can vary depending on the company you work for and the exact type of role. For someone like Mike from our film, his career has involved using his engineering degree to design rides, putting into practice everything that he knows about gravity and potential energy. Structural engineering and mechanical engineering are the two types of degree that are most closely involved with building rollercoasters.

To do a degree like that, you’d need good science GCSEs (or equivalents) and to have studied maths and physics at A Level (or equivalent). All universities have different requirements, so take a look at a few of their websites to see what kind of A Levels you would need to get for an engineering degree there.

What hours would I work?
Although theme parks and zoos are open seven days a week and on most days throughout the year, a role like this would most likely involve working roughly 9 to 5.30 Mon-Fri, but with potential for longer hours or weekend work if there’s a big project on.

Where would I work?
There are theme parks everywhere, although due to their size, they tend to be away from towns where there is more land available. SeaWorld has several parks in America, from Florida to California.

How much would I get paid?
Graduate engineers in the UK have an average salary of around £25,000. This will increase with experience, and if you work your way up to be a project manager overseeing new parks and concepts, you could get paid as much as £100,000 or more, although there are very few jobs of that kind going.

Can I do work experience?
Many people in the top jobs at theme parks started on the lowest rung of the ladder, selling tickets or showing people around, then gradually worked their way up, so it’s always worth writing to nearby parks to see if there’s anything you can do. Engineers generally do lengthy placements in the last year or two of their degree, where they put their learning into practice. However, since there aren’t that many companies who design or make rollercoasters, it might take some research to arrange a placement with one.

How might the job change in the future?
It already is! Theme parks are always on the lookout for new thrills and spills, and often lead the way in the use of new technologies, so theme park designers’ jobs are constantly changing and adapting.

What does a Kitchen Designer and Installer do?

What is it like to be a LEGO Builder?

What is it like to be a BAE Systems Apprentice?

What is it like to be a Sound Engineer?

What does a Creative Director do?

What does a Senior Engineer do?

What is it like to be an Automotive Engineer?

What does being a Model Shop Manager involve?

Is being a Puppet Maker the job for me?

What does an Inventor do?

What does a Chief Technical Oﬃcer do?

What does a Kit Manager do?

What does a Theme park Designer do?

What is it like to be an Ethical Hacker?

What does an Aquatic Vet do?

What does a Penguinologist do?

What does an Associate Director do?

What is it like to be a Professional Footballer?

What does a Brazer do?

What does a Games Creator do?

What is it like to be a Theatre Manager?